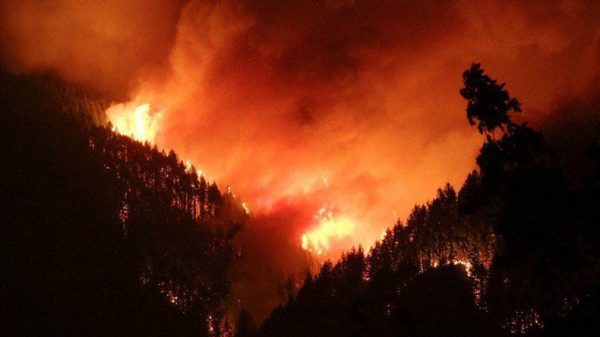 “We gotta get out of the way of what’s coming over the mountain, Mom. It’s getting way too hot here. And the smoke’s horrible.  Even worse than the Worthington fire.” The Worthington Fire?? “We didn’t want to worry you, Mom, but yeah, the Worthington fire burned more than 800 acres near us a few weeks ago. That fire was bad, but not like this one.”

For months, I’d been avoiding the news— the covid pandemic, the mass shootings, the impending presidential election; instead, I spent quiet days writing my book at my Pennsylvania farm. I had no idea what was happening out west. But with one phone call from my son, everything changed. “How close is it? Where will you go? Is there a safe place for you to stay?”

“Don’t panic, Mom. I’ve already filled the cars with gas. Deanna’s packed the bags and grabbed some food and water. I don’t know where we’ll go yet, but we’ll be okay.” My heart was beating way too fast. How would they be okay? I closed my eyes tight and saw my kids in Eagle Point, Oregon on their 20 acre farm surrounded by old-growth forest. I saw their two dogs, 4 llamas, 5 pygmy goats and 13 chickens with them up on the mountain, a mile from the the highway.

“I hosed down the house, the shop, and the garden, Mom. Deanna’s opened the gate so the animals won’t be trapped–whatever happens. Sheriff’s here Mom. Gotta go.” I hung up the phone, and willed myself to calm down

Several hours later, Adam called again. He, Deanna and the dogs were at a friend’s house in Sam Valley, sixteen miles from where they lived. “Don’t worry, Mom. We’re near a river, so if we have to, we can jump in the water.” Jump in the water??

That night, as I lay in bed, wide awake, I felt the heat, saw the flames. Without warning, it was 1981 and I was in Cairo doing my World Bank job, three months pregnant, a week after President Anwar Sadat was assassinated by members of the Egyptian Islamic Jihad. Despite the threat of violence, it never occurred to me not to go.

My last night night in Cairo, I had dinner with a British-Egyptian couple and their gregarious ten-year-old son Adam who had a story to tell: “There was a big military parade last week, where President Sadat was going to review the troops. My friend, his dad, and I went to the parade and sat on the platform with the President.” He looked at me brightly, still proud to have been so honored. “We were too excited to sit down. From the platform, we watched the planes do acrobatics in the air. We watched the paratroopers. We cheered as the soldiers drove their tanks down the street to where the President was standing and saluting. Once they got there, the troops turned to face us on the platform. Then there was a huge noise and commotion . People started screaming. Chairs fell over. Soldiers from one of the tanks were shooting the President!. I watched my friend jump up on a chair to take a picture. When I shouted, “Get down!” he was gone. So, I got down on the ground, pulled a chair over my head, and stayed there until a policeman came and took me home.”

“Eleven people died from bullet wounds,” Adam’s mother told me. “We were grateful Adam was quick and smart enough to duck for cover.”That night, I lay in bed wide awake, and saw tanks turning toward the platform, bullets flying, Sadat falling, and 10-year-old Adam taking cover under a chair. I promised myself that if my baby was a boy, I’d name him Adam. A prayer that whatever came, my son would survive.

Now, almost forty years later, I’m on the phone with my son. “Here’s what’s going on, Mom. After not sleeping at all last night, we realized we had to go back to the property real quick–just to see what happened while we were gone, feed the animals, water the plants, move stuff away from the house, while we still could. There was a lot of smoke by then, but it wasn’t until we started to leave that we realized the fire was heading toward us. We took off down the highway in such dark smoke, we couldn’t see the road. We sped through flames in 45 mph winds, gusts so strong they pushed my car into the next lane, so hot they left my face red and sore. Trees crashed down. If even one of those trees had blocked the road, caused us to slow down or stop, well . . ..” I gasped.

But the fire still burned– and continued to burn throughout the night.