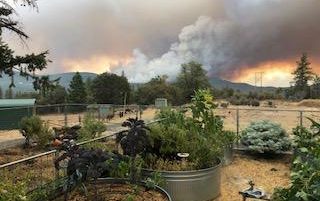 A year ago– three days after Adam and his wife Deanna were evacuated from their home, the Obenchain fire was only 40% contained. Adam called me again: “Mom, we’ve been watching the news. Eagle Point’s been decimated. Don’t worry. We’re safe in Sam’s Valley, but—you won’t like this, Mom — we’re going back to the property to get the animals.” As much as I wanted to shout “Don’t go!!” at the top of my lungs, I said quietly: “I know, Adam. I know.”

The next time Adam called, he said: “I’m at the foot of our hill. The sheriff’s with me  The trees are black stumps. The power lines are down. All the houses in our neighborhood are gone. The sheriff says it’s too dangerous for us to go to the property alone, so he’s taking me with him in his car to look for signs of life. He’s not optimistic, Mom.”

By the time Adam called again, I felt like I’d been holding my breath for hours,. My nerves were frayed as Adam continued the story: “When we got to the property, the smoke was too thick to see much of anything. Tree roots were still on fire. And, Mom, nothing at all is left of my shop.”

My heart sank. I knew all the time, energy and money Adam put into his shop over the last five years. And the shop was where he stored the huge collection of records and CDs –many irreplaceable–that he spun every weekend as a reggae D.J.

“But then, as we made on our way up the drive, the sheriff slowed the car down, pointed, and asked: “Adam, Is that your house up there?”

And, Mom, it was my house. Everything else – fences, pump house, the shop—were all gone. But our house was still there. Pristine. As if there had never been a fire. Even inside. No smoke damage. It was like a miracle.”

I steadied my breath: Both kids were safe and their house was still standing. Miracle was right. But I knew there was more to the story. Adam had gone back to get the animals. Where were the animals?

Adam continued: “The chickens weren’t hard to find. Their coop was a pile of cinders, but our 13 chickens were racing around and making a racket. When I reached them, they looked up at me like “Where the hell have you been?” I had to laugh. Even in circumstances like these, Adam could make me laugh.

“Luckily, the goat hut hadn’t burned, and Maggie, Margo, Minnie, Pearl and Zina were all there, a bit jittery, but unhurt, and waiting for me. So that’s the good news.”

It certainly was good news. Some farmers keep goats for practical reasons, for Adam and Deanna, they were family.

“But Mom, when I got the the llama shelter, it was empty.I looked everywhere, Mom. I walked the whole perimeter–but no llamas.” I heard the catch in his voice. “As I was getting back in the car, Deanna called my cell, really excited. She’d found two incredible people—total strangers – to help us rescue the animals. They were already on their way to us. I told her I’d found the chickens and all five goats. They were fine. That’s when she knew something was wrong, that the llamas hadn’t made it.

“The sheriff was in a hurry, but agreed to let me go to the neighbor’s to find out what was left of his house. By the time I got there, I could hardly breathe for all the smoke. And nothing left of the house at all.”

“But then . . . in the distance, in the smoke,something was moving. Toward me. Very slowly. Ans our of the darkness, a soot-covered tan, furry head, attached to a very long neck, appeared . . . . . . Mama Llama!”

Having expecting the worst, it took me a minute to realize what he’d just said. When I did, I shouted “Mama Llama! Mama Llama!” Adam laughed, and said: “Then, just behind her, came Cleo . . . and Coco . . . and Baby Huey! Cautiously, slowly, they followed me back to my house, where the sheriff, Deanna, her two new friends,and their livestock trailers were waiting for us.”