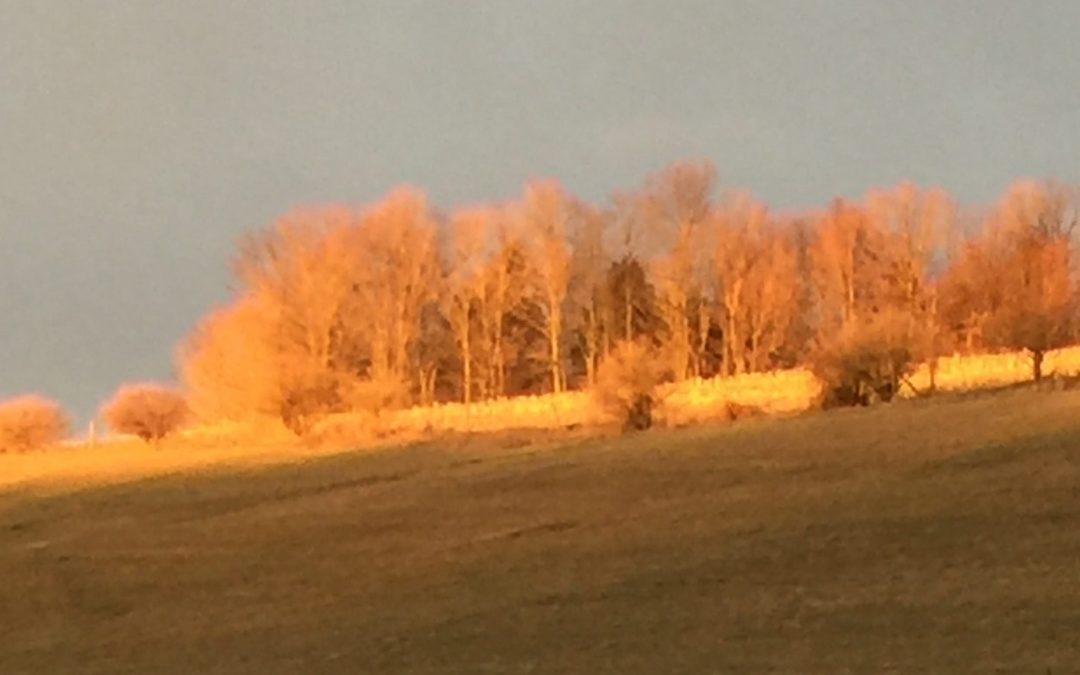 I was almost giddy with the prospect of turning our quiet farm into a real farm complete with cattle, sheep, chickens, pigs and produce.  The day after I texted Hana Yoder that we’d found a farm for them, she and Ben knocked on our door. We walked them around our 130 acre property.

No question about it. They loved the farm. The land was beautiful. Plenty of grass for the livestock. Plenty of room for the chickens and pigs  Trees to inoculate for mushrooms.  Other trees to tap for maple syrup.  A corn crib. Outbuildings for equipment. And that great red barn!

I could see Hana shared my excitement, as did her husband, Ben–but with a bit more reticence, a few more doubts about it all than I had expected. No, there wasn’t a house on the property for them to live in yet (we loved our house and weren’t ready to part with it) but there were many places on which to site a house. Surely we could figure something out. We talked late into the night. We urged them to think about it. We hugged, they left. As I closed the door behind them, I shook my head and said to Terry: “Ben’s not ready.”

Three days later, the Yoders came back. Without preamble, Ben got right to the point. “As generous as you are to offer, I’m  just not ready to own a farm yet.” When Terry asked why, he admitted that while he wanted to own, not rent, land, he’d always planned to own it in Garrett County, where he grew up and where his parents still lived.  He was wary of leaving the place where he and Hana were so well-known, the farm where they were married, and on which he’d always imagined raising a family.

They’d spent five years building Savage River Farm’s reputation; and they had hundreds of co-op members who were a part of that. Would those people be as interested in a farm an hour away? And what if it went bust? It was something huge to move a farm from Maryland to Pennsylvania, a different state with different  agricultural policies, procedures, rules and regulations. And an enormous commitment for two young farmers living on a shoe-string to buy a farm and borrow money from people they didn’t know,  build a house and  invest thousands of dollars they didn’t have to live their dream.

Although we were both disappointed with Ben and Hana’s decision, we understood. They were reasonable to be cautious. “No worries,” I said. “We’re not going anywhere. The farm will still be here if you change your mind.”

Three months later — one chilly night in January 2016–Ben called and asked if we could talk again. This time, he—not we– took the lead. Although still nervous, he said, he’d talked things over with Hana, and his farmer friend, Ian, and other friends as well. “Everyone agrees. It’s a chance of a lifetime and if I really want to be a farmer I’d better jump at it.”

I did my best to remain impassive.

“Yeah, I’d have loved to stay in Garrett County, if I could have. But our landlord doesn’t have any plans to sell us that farm. Ever. And Hana says I’m wrong to think we shouldn’t move just because this is where we got married. Now that she’s pregnant . . . yeah, she’s pregnant! . . . if we get a farm of our own this year, this will be the only home the baby will ever know. And that’s cool, right?”

“We’ll need a loan to build the house. We’ll need help from our farmer friends to make the move, and the whole crew will also need a place to stay. We’ll have to fence pasture land and that’s a lot of drilling. We’ll need to grind corn and that’s a lot of grinding. A farm’s pretty noisy, you know. A farm’s pretty dirty, people stomping everywhere with muddy boots. Are you sure you can live with that? Are you sure you really want to do this?”

Yes, we really wanted to do this.

Almost a year to the day we first talked to Ben and Hana about the farm,  we were in a lawyer’s office in Somerset, PA, signing over 100 acres of farmland to two more-than-deserving young farmers. And with the land came the big red barn.