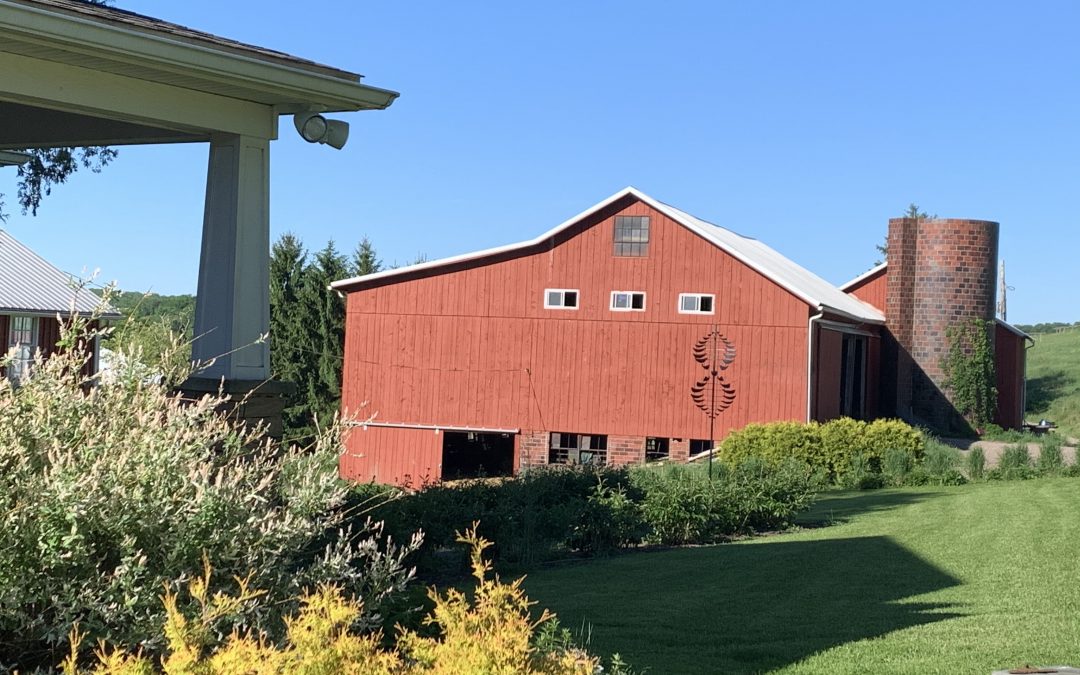 After ten months in Portugal, it’s taken me about four weeks to settle in to my American life. Although everything I wrote in my last post still applies, it’s hard to move back and forth between two homes, the month we’ve been back reminds me how much I love our Pennsylvania farm.

It’s Wednesday and from the window in my study I can see that the barn– just a stone’s throw from our house–is buzzing with activities as it always does on Wednesdays: tractors coming and going, dogs barking, people pulling up in cars, kids chasing each other and laughing. This is definitely not the farm it was when we moved here thirteen years ago. And this beautiful red barn bears little resemblance to the dilapidated, dingy one that once stood where this one stands.

Growing up in a suburb of Washington, D.C. I knew next to nothing about farms.  Although I spent summers in New Hampshire with my grandparents in an old house on land they called “the farm” it wasn’t a real farm. It was just a ramshackle house with a small rock garden, a well, and an outhouse. No animals. No vegetables. And certainly no barn.

But it took me no time to realize how much I loved the country life. After working in D.C. and traveling for the World Bank for thirty years, raising two sons, owning and managing an art gallery, I was ready for something new. I began to write a book. Our 130 acres offered us more than just a buffer from bad-guy developers, it offered us views from every window, woods to walk in, open space for our dogs to run, good soil in which to grow vegetables and flowers, and a quiet place for me to write. We weren’t farmers, so we leased the fields to our Amish neighbors from which to make hay, and let them store it in our two-story barn.  A pretty idyllic life, you might say.

For seven years we enjoyed more peace and quiet than I could have ever imagined, until one night my husband Terry and I were startled awake by a loud crack. Then another. And another. A ferocious crash. We rushed to the window in my study and watched as our old barn collapsed under the weight of too many tons of hay. The second floor caved in, and the walls followed. We weren’t farmers, but we loved our barn, and it was an agony to watch it crack apart like this.

After very little sleep that night, the next morning we sat drinking coffee and talking about what to do about the barn. Let it go? Repair? Rebuild? By noon we had decided, and were on the phone with our contractor Cory Twigg, and asked him for an estimate to rebuild the barn. After inspecting the damage, and shook his head. “Do you really want to do this? It’s a huge structure. Most of the wood is rotten. It’ll cost almost as much to rebuild the barn as it did to build the house. Do you really need a barn?”

No, of course we didn’t need a barn. Terry was a fisherman who made art, I was a writer who took pictures. Neither of us needed a barn. But over the years we’d grieved the loss of the family farm and the barns that were no longer. We couldn’t save the ones that were gone, but we wouldn’t let this barn die. Yes, I told Cory, we wanted to do this.

Three months later, I stared out my window at pastures for animals we didn’t have, fields for crops we didn’t grow,  out-buildings for tractors and equipment we didn’t use. And a huge red barn that we didn’t need . . .  but a barn that would last forever.

No, we didn’t need a barn. But maybe someday someone would.