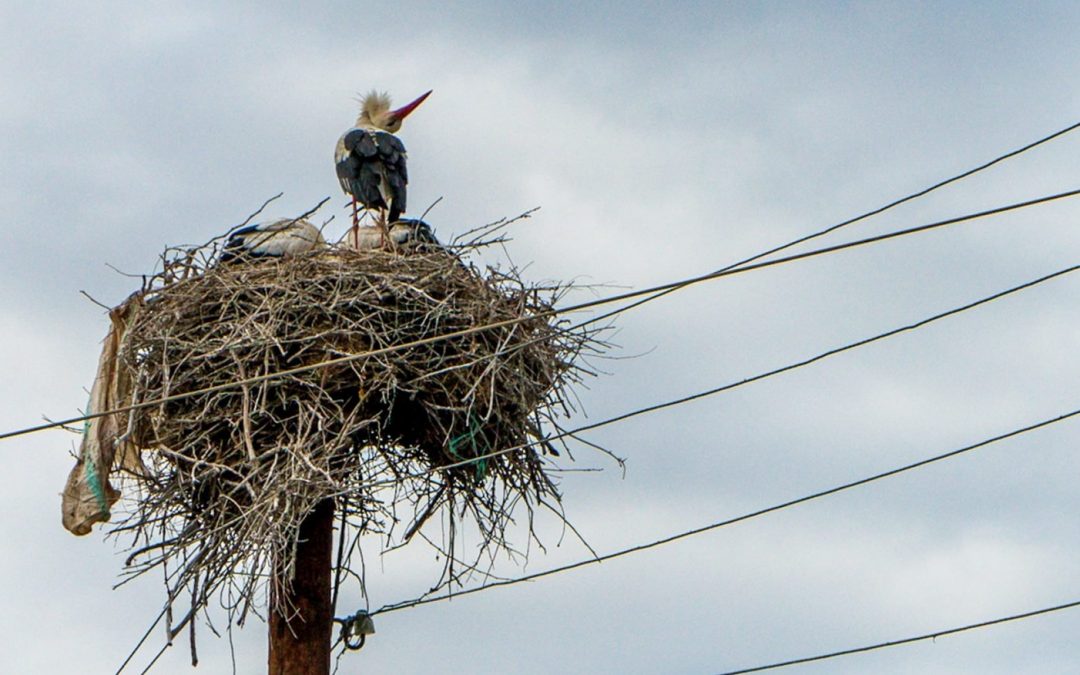 As my husband Terry knows well, I have a tendency to live in my head and frequently fail to notice what’s in front of me. Had it not been for Terry calling attention to the nests high above the highway while driving back from a visit to the west coast of Portugal last year, I might never have seen them; huge nests built high on power line pylons, mile after mile of them, often several nests on the same pylon.

“Storks!” said Terry, slowing the car down so I could get a good look at them.

Until that moment, I’d never seen a real stork before – just cartoon storks carrying babies in bundles in their beaks, flying off to make deliveries to eager new parents-to-be. For me, the stork was more myth than anything else.  There are, after all, virtually none in the United States. But they seem to be a very happy feature of the Iberian landscape.

White storks (ceghonas brancas) are nothing if not distinctive. They stand nearly 4 feet tall, with a wing span of up to 7 feet, a large red beak, white and black plumage and long red legs. They lay 4 eggs at a time and both parents share the duty of incubating them. During the first two months the chicks are constantly supervised by one of the parents while the other forages.

Although young storks become independent at around 3 months, they don’t mate for another 3 or 4 years, and when they do they like to return to the same site where they were raised. Nests are built high with easy access to open farmland, wetland or marshes, where the storks swoop down for insects and small mammals  The same pair typically returns to the same nest year after year, and if their nest is removed, they will rebuild it in the same place it had been before.

The stork’s main way to communicate is to “clatter”, a sound produced by rapidly clapping its beaks together, with its neck stretched up and backwards. Quite a dramatic greeting! The more I learned about storks, the more appealing they became.

But what made them even more appealing was what they’d symbolized in so many societies over the years. Ancient Egyptians, Greeks, Romans and Native Americans all revered storks for their protectiveness, loyalty, love of family and cheerful good nature. The Portuguese are passionate about protecting storks, and who can blame them? By decree, their nests are protected against disturbance, removal or destruction. Permission to remove them is only granted when there is “extreme danger to public safety.” In 1995, no more than one thousand storks were reported in the Algarve. Today there are more than 14,000.  How about that?

While reading about storks, I learned  that after wintering in Africa, many make their home in and around Silves in the Algarve, on Portugal’s southern coast. Although Terry and I have tended to avoid the Algarve as too Miami Beach for our taste, if it meant seeing storks we were game. So, we packed up the car and traveled four hours to Silves. We drove around the city, into the city, and along the river. To our disappointment, Silves was just a town like any other, lots of traffic and one-way streets. And nary a stork in sight.

So, we continued  on for another 40 miles to Sagres, said to be a very good place to see storks. But when I asked the man at our hotel reception where we might find storks, he looked at me oddly:  “Storks? What storks?” This was not what we’d traveled five hours to hear. Nonetheless, it was April and the teeming hordes of holiday-makers had yet to descend. The beaches were vast and virtually deserted; the sunsets were superb ; and we discovered a restaurant serving the best Indian food this side of Delhi. So even if all I saw were soaring gulls, not storks, I was glad we’d come.I shifted my quest for storks to reconnaissance for the best beaches for my water-loving, surfer family—kids and grand kids – who will come to Portugal next fall.

On our way back home, Terry at the wheel, I made a point of noticing my surroundings, taking joy in this new country I’d adopted. And suddenly I saw them.

And indeed, there they were. Dozens and dozens of storks. Nest after nest of them. A grove of olive trees alive with them. Storks soaring. Storks nesting. Storks clattering.

Seeing them there, it all came back to me why I love them and all they’ve represented to human kind. Community-minded. A farmer’s friend. A loyal and egalitarian spouse. Attentive to the needs of children and the elderly. Birds full of optimism and hope. Don’t get downhearted, they clatter. These are my kind of creatures!

In times like these, the more storks the better.