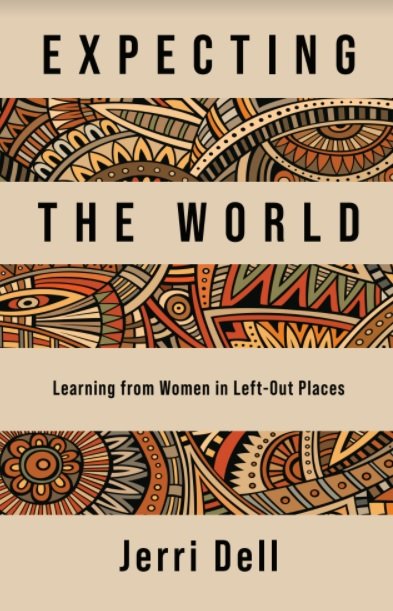 Expecting the World is the story of one woman’s unlikely thirty-year career in the male-dominated World Bank. It is an intimate account of the author’s work and travel in the Middle East, Africa, South Asia and Peru. Her story unfolds within the historical context of the last three decades of the twentieth century, including the Egypt-Israeli peace accords of the 1970s, the assassination of Egyptian President Anwar Sadat in 1981, Nelson Mandela’s release from prison in 1990, and the horror of September 11, 2001.

What happens at the cusp of social change in the 1970s when wicked-smart, feisty Jerri Dell is hired as a secretary at the staid, male-dominated World Bank? She was a force of nature, letting Robert McNamara know what’s what, finding her inner diplomat to navigate all sorts of treacherous waters. She made change in her own life and in the lives of many women in developing nations. Expecting the World reads like a good novel, a heroine’s journey of the first order.

Jerri Dell’s Expecting the World is among the books we need now. Right now. More than a memoir of her years of work on behalf of and with “women in left-out places,” it is a demonstration of all the good that can be done by a person guided by her values and “making it up as we go.” Dell offers us a front seat at pivotal moments in the struggle to make economic policy inclusive of women and families across the globe, and enjoins us to find new ways to listen, respond, and cooperate towards our shared future. In a prose rich in description and detail, Dell ushers us into a story made of many stories.  I couldn’t put it down!

~Richard Hoffman, author of Half the House, and Love & Fury

Jerri Dell’s immeasurable charm and grit are palpable through every page of this book. Her unique experience – and voice – at the World Bank takes the reader by the hand on both a personal and universal journey through what it’s like to be a woman – to be women – navigating a man’s world. She demonstrates with passion and vivid stories, with courage and humility, that women in “left-out places” have more to teach us than a man’s world ever imagined. Expecting the World weaves a global village of thoughtful women (and yes, men), rich and poor, powerful and seemingly powerless, but all willing to constantly learn from each other, to make a difference. As someone who came to the World Bank a decade after Jerri, I am eternally grateful for the path she cut that enabled those who followed to move one step closer to a world where everyone’s voice counts.

Expecting the World chronicles decades spent helping women in Africa, Asia, and Peru to lift themselves out of poverty. Jerri Dell’s memoir of her fascinating career in international development is clear, compelling, and a wonderful reminder of how the world changes one small step at a time.

Jerri Dell’s memoir, Expecting the World, tells of arrogant or rather clueless men unable to see much less relate to the women in far less prestigious and privileged positions whose wisdom and energy truly make things work.  But with endless resources of bureaucratic courage (a reality, not an oxymoron), Jerri Dell found creative ways to support the women and even bring them into the halls of power. Expecting the World is a story of women’s empowerment at several levels: a journey from a world of men and “girls”, bosses and secretaries in the World Bank, a large complex international institution, to one where many women demanded and often came close to something approaching equality.  It’s a story of the women at the grassroots, working together to surmount the many barriers that face them.  And it’s also Jerri Dell’s story of living this transition and, in the words of Mary Catherine Bateson, “Composing a Life”, with guts, setbacks, love, misunderstandings, growth, and adventure. The memoir offers both the living reality of the World Bank’s rather reluctant transformation and a women’s journey through life.

~Katherine Marshall, author of The World Bank: From Reconstruction to Development to Equity

The World Bank works in countries that are stuck in poverty, inequality and mismanagement. But the World Bank itself has been stuck at times— in hierarchical rigidities that undercut its critical poverty-fighting mission. Both the countries and the Bank would do better if they unleashed the power of women, and Expecting the World tells the story of Jerri Dell, a career World Bank professional, who advanced this cause in the countries and within the institution.

~Tim Carrington, author of The Year They Sold Wall Street

When managers of the World Bank hired a twenty-three-year-old French major, they thought they were hiring a typist. Little did they know that this American “girl” was a third-generation feminist, starting with her suffragist grandmother. In the next thirty years of her career, Jerri Dell carved out a corner of the male-dominated international bureaucracy, empowering herself and thousands of women in the developing countries she worked in. Expecting the World is an inspiring story of how one determined woman can make a difference.

Anyone who has worked in international development will identify with the stories that make up this highly readable, deeply personal, and remarkably detailed book. Full of colorful episodes, it describes the jealousies, distrust, and even sexual dynamics encountered—and fought—along the way. This memoir  is highly pertinent to the state of the world today, where countries from Afghanistan to Zimbabwe are turning away from democracy in favor of male-dominated, top-down authoritarianism. Author Jerri Dell shows that other outcomes are possible, how by collaborating with grassroots women she discovered the leadership, innovation, and persistence that makes those outcomes come to pass.

Jerri Dell has written a poignant memoir of her 30-year career at the World Bank. It is a brilliantly written book and captures fully her passion for work on the advancement of women both inside the World Bank itself, and as well, the programs that she helped to design and implement for women entrepreneurs in developing countries. Expecting the World also exposes the internal operational culture of the World Bank, by provide startling examples of misogyny, racism, ascendancy and domination of macro over micro (in development financing, lip service being paid to adult learning, training and capacity building. These prevailing values, attitudes and approaches were rampant when Jerri Dell joined the World Bank. Suffice to say, as a self-confident and pioneering female manager, she faced all of these and more.    A fabulous read.